“As a Black entrepreneur, I can tell you that I am over-mentored and under-funded.”

These were the words that Alex West Steinman, co-founder and CEO of The Coven shared during a gathering of corporate, civic, and philanthropic leaders discussing strategies for closing the racial wealth gap in Minnesota. They had come together at Sabathani Community Center in Minneapolis—just blocks from where George Floyd was murdered two years earlier—for the launch of GroundBreak Coalition, an effort to transform the Twin Cities from being the epicenter of racial injustice to the epicenter of racial opportunity.

West Steinman’s words illustrate how access to capital has been a persistent barrier for individuals and communities of color. As a region, we haven’t yet figured out how to make money flow equitably to power the visions of Black, Indigenous, people of color (BIPOC) business owners, homeowners, neighborhoods, and families. That needs to change.

GroundBreak Coalition seeks to rewrite the rules on how finance works, ensuring money can move faster and differently. In other words, make capital work FOR community, so it can power the visions of people like West Steinman, and so many others.

The launch of GroundBreak Coalition on May 12 was an invitation to financial and corporate institutions, government, and philanthropic and nonprofit leaders to commit to unlocking the wealth potential of historically under-invested communities. The ultimate goal is to mobilize more than $2 billion over 10 years and deploy it to four areas: homeownership, rental housing, commercial development, and BIPOC entrepreneurship.

Working together, we know we can position Minneapolis-Saint Paul to lead the nation in committing needed resources to achieve racial and economic justice.

Below are our five takeaways from the GroundBreak Coalition launch: 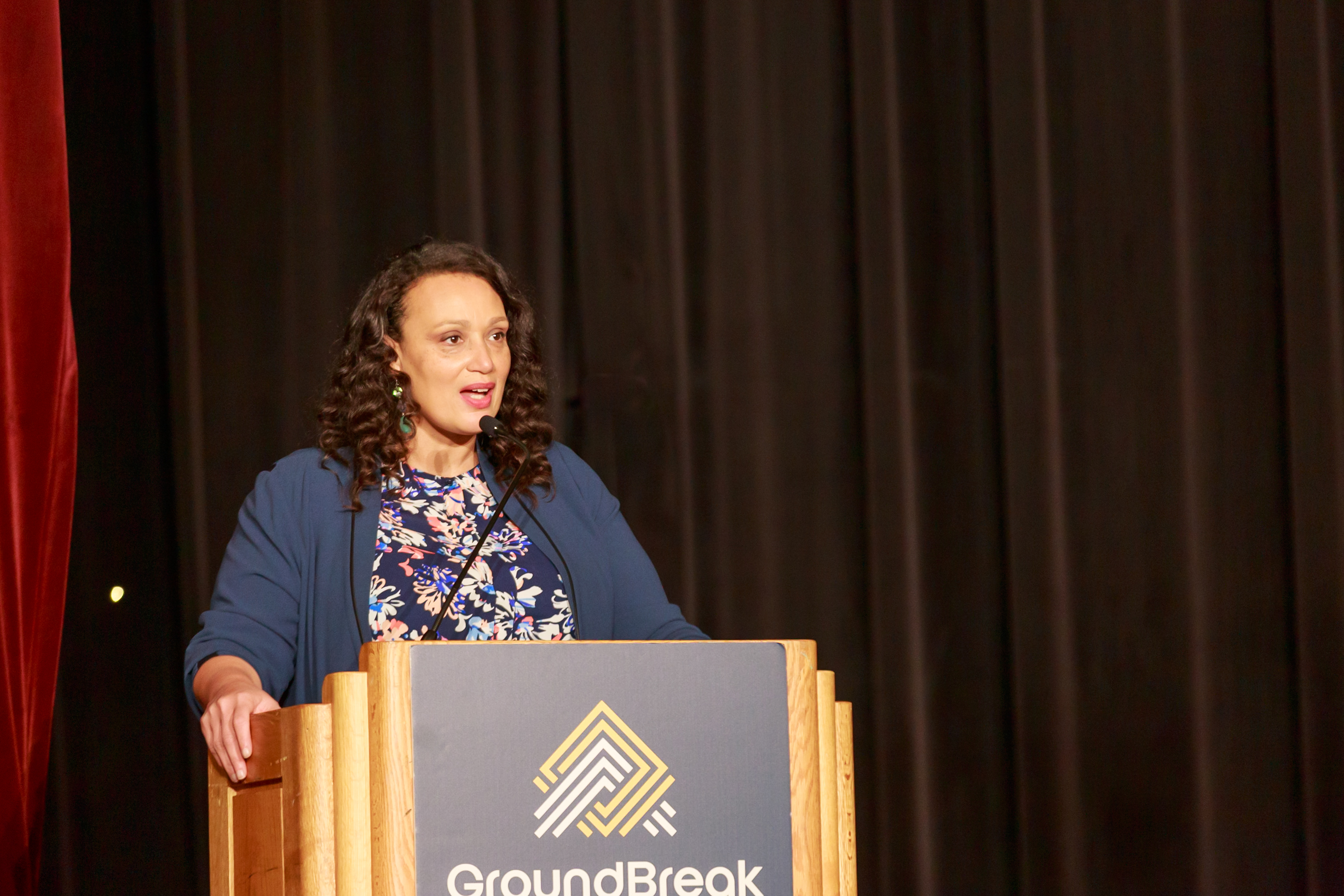 1. It’s not a fund, it’s about fundamental change

“GroundBreak is a joint effort to take away the barriers to capital, and find new, innovative financial tools to make money flow faster and differently, so that it works for our community.” – Tonya Allen, president of McKnight Foundation

Following the tragic murder of George Floyd and civil unrest that followed, we asked communities to reimagine what a vibrant future looked like. They answered the call, coming together in unprecedented ways—working through trauma and loss to collectively envision a more equitable future. What we heard was that they need access to financial tools and capital to start and rebuild businesses, buy homes, revitalize their neighborhoods, and give their children and grandchildren a better life.

GroundBreak Coalition is about getting money to move faster and move differently to power community vision. It’s about availing financial tools to those who have historically been excluded, but it is also about doing the deeper, longer work of disrupting the status quo, unraveling policies and biases embedded in our financial and civic systems so we can close Minnesota’s longstanding racial wealth gaps. 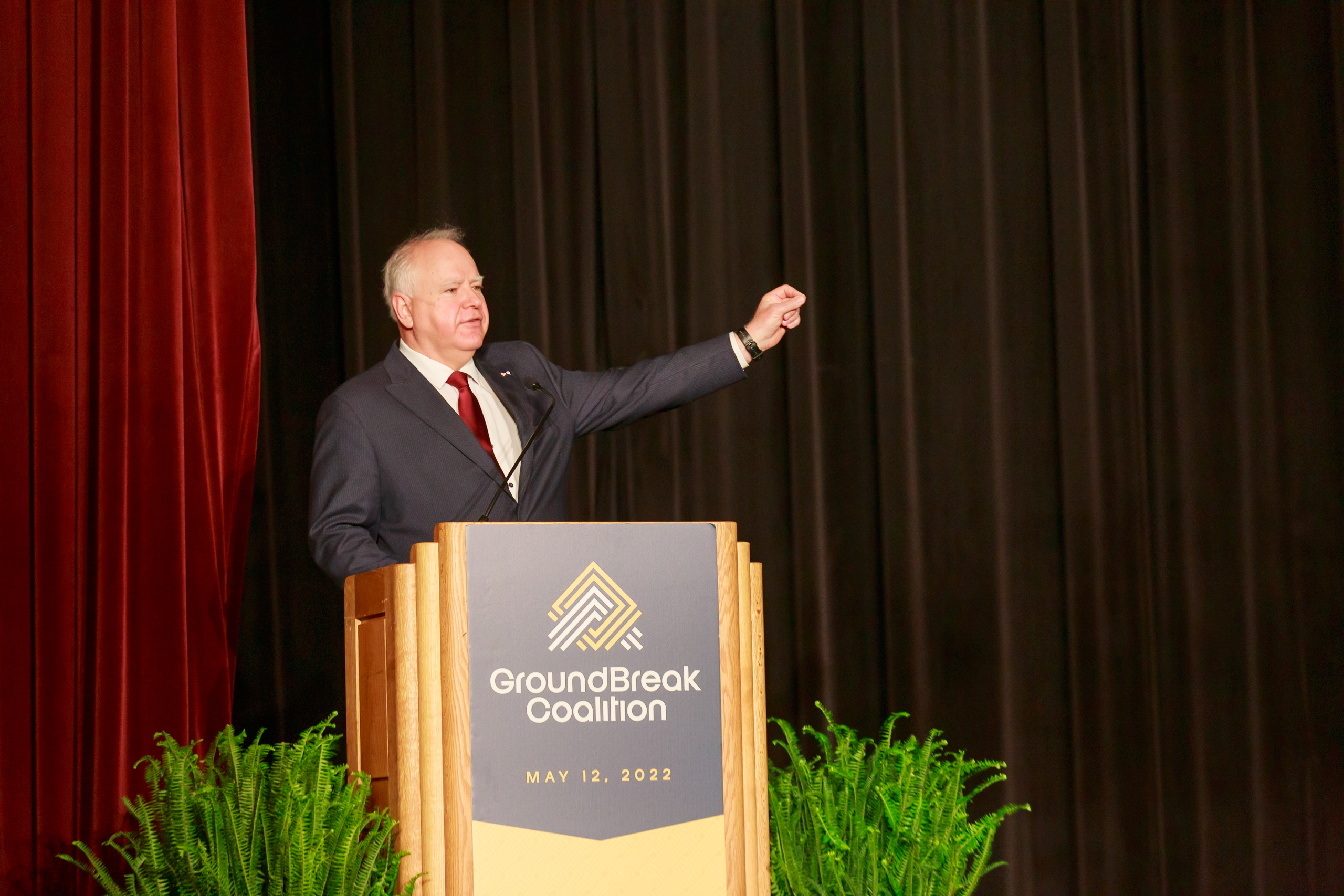 2. Our future depends on us closing racial equity gaps

“There are pivotal moments in every state’s history, and when we look back this will be one of them. The vision of a Minnesota that truly belongs to everyone is real. Our future depends on us fixing these gaps in equity across the board.” – Minnesota Governor Tim Walz

Closing Minnesota’s racial wealth gaps is not only about righting historic wrongs, it’s about building a better future for everyone – one that fully realizes the economic potential of our region.

Business, community, and government leaders know firsthand that achieving equity enhances our state’s civic, cultural, and economic vitality. It strengthens our workforce, ensures that local businesses can compete in the global economy, and enhances the quality of life for all communities. In fact, research has shown that Minnesota’s annual GDP would be $18 billion higher if we had closed racial income gaps. 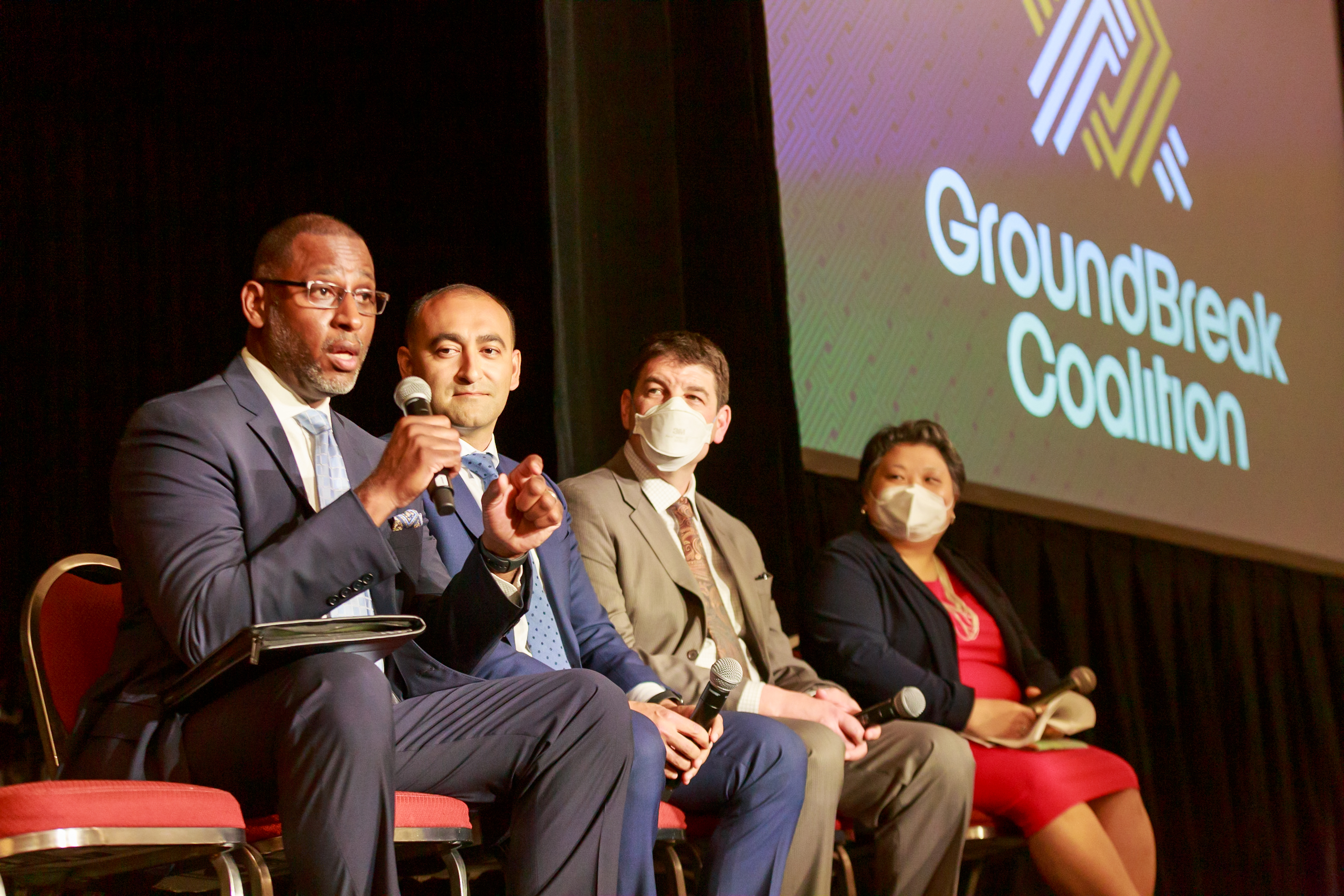 3. None of us is smarter than all of us

“The real risk here is doing nothing. We’re looking to work together as a coalition, to actually set metrics that would close the racial gaps and lean into the work that’s important. What’s the clarion call? Work together, do something different, and make a difference.” – Dondi Edwards, senior vice president, Wells Fargo

No one organization, business, or government entity can solve these complex challenges alone. It’s why GroundBreak Coalition is committed to building and innovating with partners who are already making progress and piloting new, creative ways to shift toward greater racial equity.

We all have something to contribute. As a region, we need to work differently together to tackle our state’s stubborn racial inequities and the related challenges that lay before us, like the climate crisis. The good news is, we have the talent, the leadership, and the will to do it. This is our moment to flex our civic muscle and join hands. Together we can craft a future we all deserve.

4. Equity is a money word

“We’re in a position to really rethink how we do things, how we provide capital to BIPOC folks. Because the way we’re doing it now isn’t working. Everyone should be able to build wealth and not be indebted for the next 30 years. We need to own this place. Minnesota is ours.” – Henry Jimenez, executive director, Latino Economic Develop Center

Equity is about fairness and justice, yes. But it’s also a financial term— it’s making sure everyone has access to resources, and the opportunity to own appreciating assets like a home or business. True equity is when you can no longer count outcomes among people because of their race, where they live, or their economic status.

GroundBreak Coalition aims to embrace equity in terms of how people participate in the economy—specifically aiming to expand the number of people in our community who own appreciating assets. The goals are ambitious, but necessary: 45,000 new BIPOC homeowners, 23,500 families in affordable rentals, 30 climate-ready commercial developments, 11,000 newly launched BIPOC-owned businesses. 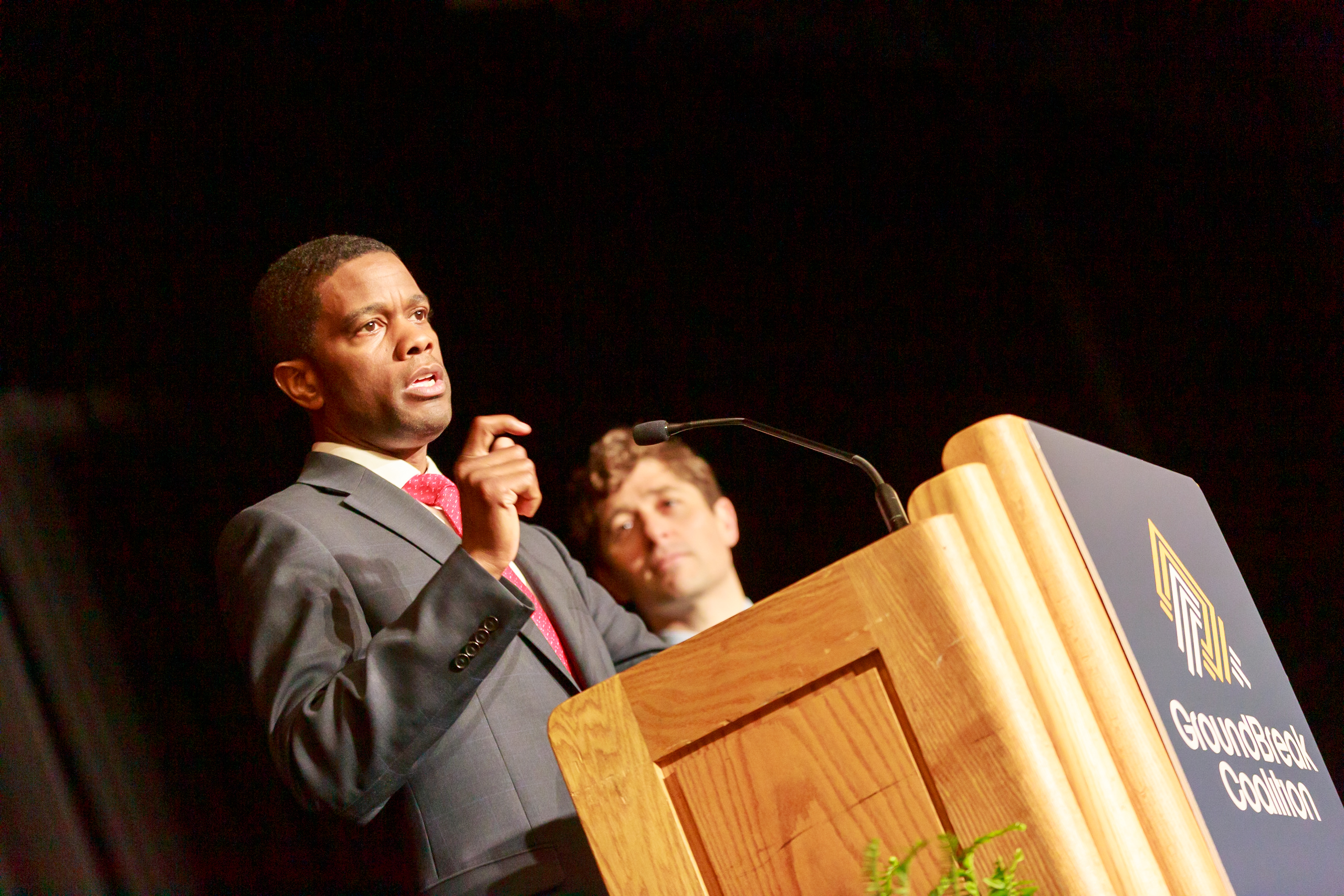 “We’ve talked forever about the disparities Minnesota faces, and we’ve seen them on display in the last two years. I’m excited to march forward today with you and break ground on a solution that the rest of the world will follow.” – Saint Paul Mayor Melvin Carter.

We need to approach this challenge with an abundant mindset and think big. We know there are financial strategies and programs that work, so we need to scale them up. We know there are obstacles that we need to dismantle. We don’t have all the answers, but we’re committed to working together to find them. And we know GroundBreak Coalition is not a silver bullet, but it’s a step toward rewriting the rules and building an equitable, carbon-neutral economy where every Minnesotan can thrive.

More photos from the event 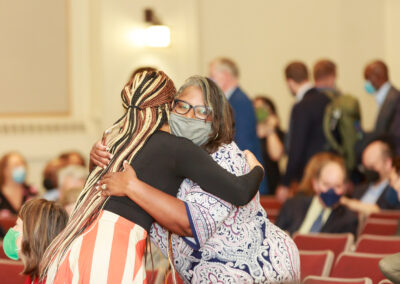 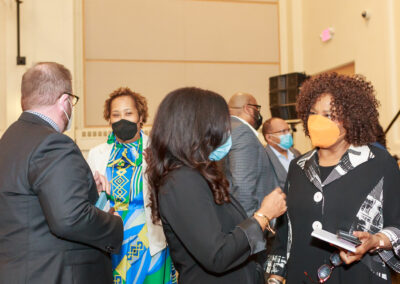 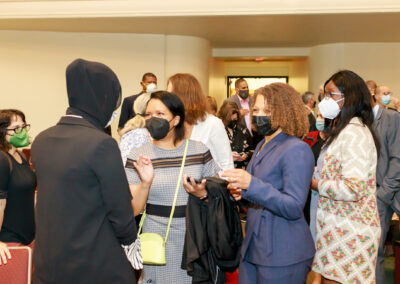 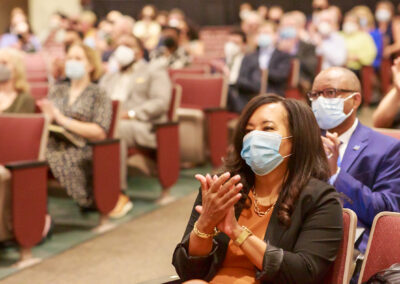 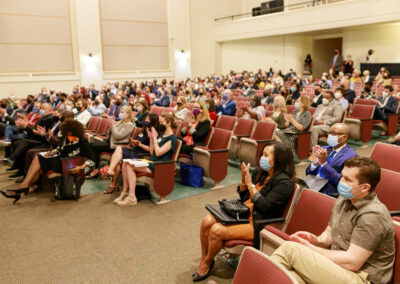 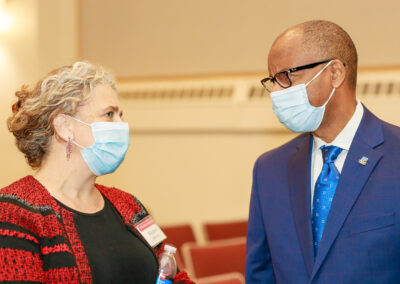 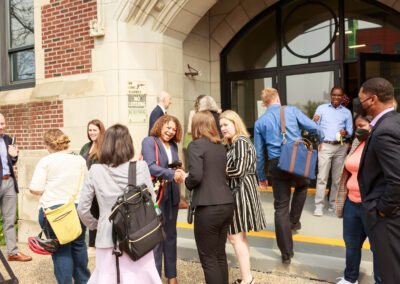 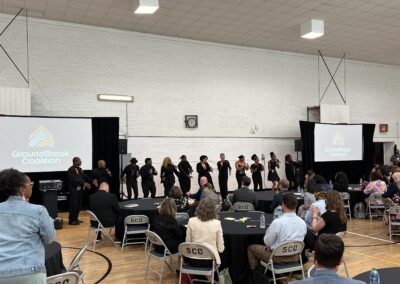 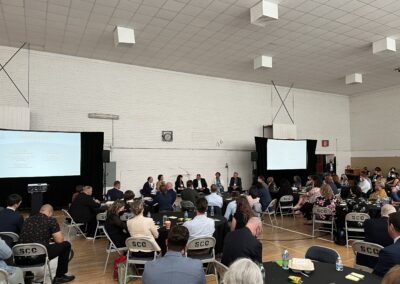 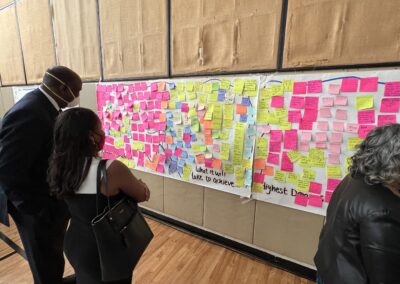 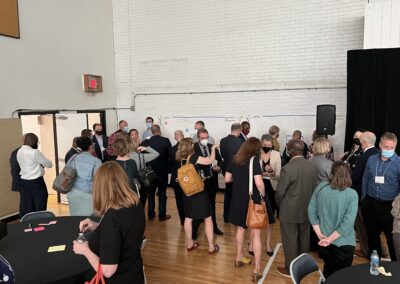 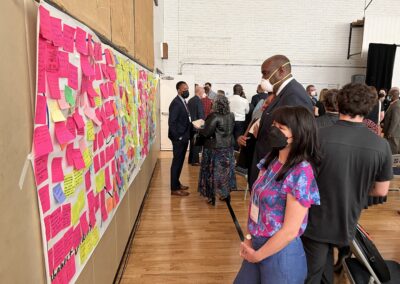 25+ corporate, civic, and philanthropic leaders launch GroundBreak Coalition to mobilize the dollars we need to power community vision. It's changing how we do business to make money flow faster and differently—so it works FOR community. #GroundBreakMSP https://t.co/RBJOrBggDS 🧵 — McKnight Foundation (@McKnightFdn) May 12, 2022